Top 5 reasons Why VPN is used ? 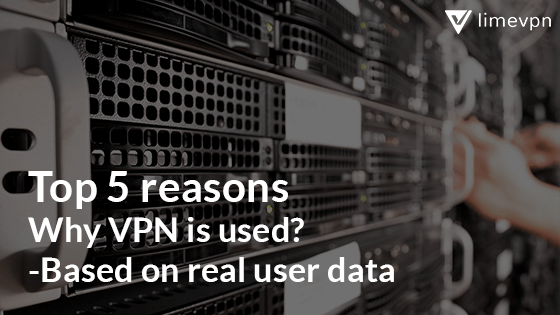 There are numerous reasons why people would opt to use a Virtual Private Network. To be honest, we cannot really count them all because each day, something new on the internet requires a VPN.

Top 5 reasons Why VPN is used

5. To achieve communication with relatives and friends who live abroad

4. To access websites which are not allowed at their workplace

3. To access social media sites which are restricted in the users’ country

1.  To become and remain anonymous while browsing the internet

On the other hand, we can show the five most popular ones. Throughout this article, we will discuss those reasons and how they impact general use of internet as well as their advantages and disadvantages. Therefore, let’s see the fifth most popular reason first.

5. To achieve communication with relatives and friends who live abroad

You might think that it would be possible to use Facebook all over the world, but that is wrong. Places such as China have big Firewalls which simply do not allow certain Websites. Some of the most popular websites that you will not be able to use in China are:

I think this is just enough (and the list is practically endless) to see that the only form of communication with people who are far away from you is not possible in China. This is a great opportunity to start using a VPN, which will allow you to freely surf the net and communicate with your friends and relatives, especially using Skype because Skype is also a program which is blocked in China. As much as 25% of the users said that this is why they use VPN

4. To access websites which are not allowed at their workplace

People often stop doing their jobs and start surfing the internet when they are at their workplace. This is the reason why many big and small companies bought superb programs which will not allow you to use some of the websites which will draw your attention from work.

However, VPN solves this problem by overcoming this firewall in the same way that it overcomes the Great Firewall of China – with encryption and different IPs. Therefore, many people now actually work and still access the restricted websites – and to tell the truth, I do not believe that it lowers the quality of work in any way.

3. To access social media sites which are restricted in the users’ country

We mentioned in the first paragraph that some countries, such as China or Turkey, do not really allow many websites to penetrate their ground. People in these countries are finding different ways to get to those websites, and the most popular and the most reliable way is of course – Virtual Private Network. With an IP (dedicated or shared), the subjects from those country represent themselves on the internet as if they are located in some other country and, thus, are able to enter the blocked websites.

In other words, as much as 27% of the users listed this as the main thing why they use VPN. Now, we can see Chinese people on Facebook and Turkish videos on YouTube thanks to this invention. The question remains, however – are they breaking the law? Well, that is a whole new topic for discussion.

Therefore, the second main reason why people use is this. As a matter of fact, even the websites such as YouTube or Apple Store are not present in all countries. How? Well, does it ever happen to you to click on a YouTube video and get – this video is not available in your country. Well, it is simple as that. The percentage of users who use a VPN in order to watch media and entertainment content outside of their country is 30%.

1.  To become and remain anonymous while browsing the internet

Honestly, we all fear of being spied by various people while we are online. While some of them are just a product of conspiracy theories, some are more than real – such as the government. I do not want to sound just like a prophet of doom, but even a person with just a little knowledge of hacking can get basic information about you. Therefore, by hiding your identity, you are safe from any harm.

This also includes activities such as downloading torrents and visiting piracy web-sites – some countries control it more than others, but with VPN it all can be avoided. As much as 31% of users stated that they want to hide their identity on the internet.

To sum up, let’s look at the final statistics. Bear in mind that people who use VPN chose two or even three answers.

The source of this piece of information is globalwebindex.net

To cut the long story short, VPN is used by millions of people worldwide for many different reasons and the capabilities of it are really limitless. Whether you want to use it for anonymity or reaching the restricted websites is really up to you – but your life would certainly be easier with it than without it.