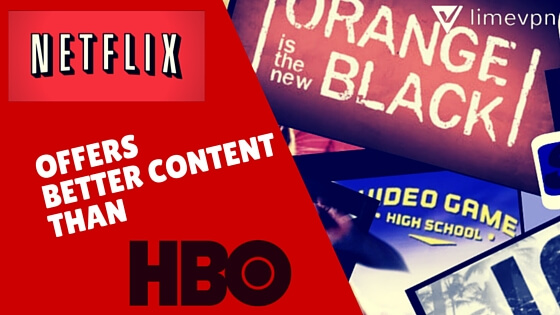 1 . The crown is passed to Netflix

3. What actions will be taken by HBO and Netflix?

Netflix and HBO are currently the biggest competitors at who is going to provide the better original content and, thus, make the viewers like them more. Viewers were questioned for one TV survey and the results were quite surprising – Netflix won this round as the better provider of the original content of high quality.

The crown is passed to Netflix

This is rather interesting because whenever someone mentioned HBO earlier, the first association was high quality TV shows and movies. However, this is not the case anymore and now Netflix as well has to be included in that category of good TV show providers. We all remember how HBO gave us TV shows such as The Sopranos, Sex and the City and the currently Omni-popular Game of Thrones. All of these shows somehow became a cornerstone for further buildup of quality of the HBO channel. Furthermore, HBO became so popular that several other HBO channels started and users had to pay subscription to watch their content. All of the other networks desperately struggled to at least imitate the popularity that HBO achieved.

But this is all the past now as the groundbreaking survey suggests differently and the real king of the good content became Netflix instead.

Morgan Stanley’s survey tells us that as much as 29% of the viewers surveyed answered that Netflix offers the best content while the second place is occupied by HBO with as much as 18% of the viewer’s voting for it having the best content. The third, fourth and fifth place are reserved for Hulu, Showtime and Amazon and they all have between 4 and 5%.

The same survey was conducted one year ago and the results were quite different. HBO got 31% of the viewer’s votes and Netflix was on the second position with the 23% of the votes. It is inevitable that Netflix will do even better in the future due to its super-popular shows nominated several times for Emmy such as Orange is the New Black. They simply play it aggressively and nothing will be able to stop them from becoming the best in the world.

What actions will be taken by HBO and Netflix?

This means that, according to the analysts from the Morgan Stanley, in 2016 will start spending more money on the original content than HBO for the first time in history. Their budget for 2016 is the massive 2.5 million dollars while HBO plans to spend 1.8. This also made people from HBO rethink their actions and they made an announcement that they will invest even more and make even better content. Just for comparison, Showtime, which is the third on the list of this survey, spends about $700 million on the original content.

On the other hand, this investment also means that Netflix will raise the monthly subscription a bit because the survey also stated that 45% of the users subscribe because of the high-quality content and not the low prices. This is also a number that went higher than the last year when it was on 34%.

Sadly, if you are out of the US and want to watch shows on Netflix, you would have to use VPN for Netflix.

How to VPN Netflix?

Although Netflix went global, the content that it provides in the certain countries is simply not the same as in US. That is why, in order to follow everything that they offer you might consider using a Virtual Private Network (VPN). VPN has many benefits and one of them is bypassing geographic boundaries. This means that, with VPN, your geographical location will not be familiar to Netflix and you will be able to unlock & stream media content as if you were located somewhere in the US.

5 Reasons Why VPN is Used- Based on real user data