How to overcome Facebook Block using a VPN anywhere 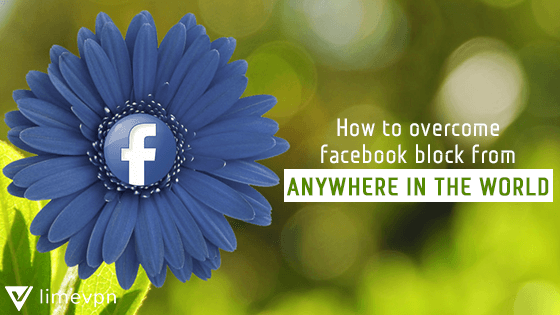 More than half of the users of the most popular social medium in the world believe that ‘Facebook does a sacred job of connecting people all around the world.’ Every once in a while, we hear a story of Facebook connecting long lost families and creating new friendships on different continents. This would indeed be a great story if there was not for politics to meddle. Many a countries in the world have governments that lead pretty closed politics, which means that connecting with people around the world is not possible, thus Facebook cannot be accessed from those countries.

Well, the reasons are all really different and vary from country to country. One of the most popular reasons is to deny the right of the citizens to publicly express their opinions and their dissatisfaction with the government. This was an example in China, when Facebook and Twitter were blocked due to the fact that many Chinese protesters against government uploaded pictures of riots, which could have destabilized it. Of course, China is not the only country which blocked Facebook, and we shall see a timeline of countries that blocked (even temporarily) or discussed blocking Facebook as well as the reason why they did it.

One of the first bigger incidents that happened was the creation of fake profile page of the Prime Minister of Mauritius. This resulted in one of the first known Facebook blockages in the world, and it lasted for…well – one day. The Information and Communication Technologies of Mauritius thus proved that they have an active control of the things happening in this country and its users on Facebook.

Syria was also very quick in banning Facebook and the excuse was the concern for the possible attacks that may be organized on the authorities. The ban was ended in 2011.

The second big incident happened in Morocco, when someone created a fake Facebook profile of Moroccan Prince. However, Facebook was not banned, but heavily controlled. Furthermore, websites such as YouTube, Skype and Google Earth have been banned and un banned periodically.

After the elections in Iran, Facebook was seen as a threat and the government thought that it is used for growing the opposition stronger. Therefore, in 2009, Facebook was officially banned from the country. It all lasted for 4 years, until something happened and Facebook and Twitter were suddenly available to all of the citizens. This was very strange, because there was no notice about it. Many people believe that it is some kind of a glitch that happened and allowed Facebook. However, restrictions regarding the internet in Iran are still very high.

China officially blocked Facebook in July 2009. Since then, Facebook was never activated again, although many people find different ways to access it. The reason for blocking it was a riot that happened in Ürümqi. Facebook was the main platform through which the protestors communicated and organized events. Since then, there were many attempts to bring Facebook to China, especially due to the fact that Mark Zuckerberg is married to a Chinese. However, since then, China remains the main „enemy“ to Facebook Empire, with its Great Firewall of China blocking the way.

Egypt also blocked Facebook for a few days during the riots that took place all over the country. Although Facebook is available now, the whole internet freedom is questionable in Egypt, as it is marked as „partly free“.

Although never officially blocked nor banned in Germany, Facebook was a discussion topic in Germany’s government two times. The first time, the government just wanted to ban event creation on Facebook due to the fact that open events were (as a joke) attended by thousands of people, who actually attended the event in real life. The second time Facebook was discussed was after the refugee crisis, when right wing nationalists started organizing events on Facebook and growing stronger. However, this issue still is not solved and we are yet to expect what German government will do on that matter.

Malaysian government also blocked Facebook for the couple of days, during the protests that happened in Egypt.

The blocking of Facebook never happened in UK, but many groups and pages were deleted by the government in the period of the royal wedding. These were mainly political activists who worried about the government’s spending cuts.

Due to a difficult political and religious situation in Bangladesh, Facebook was banned for the first time in 2013, when many people, including an atheist blogger Ahmed Rajib Haider, lost their lives. The second time, Facebook was banned in 2015 and it has remained out of the reach of Bangladesh citizens since then.

Although North Korea issued an official statement in 2016 which bans this social medium, Facebook (and most of the Internet freedom, for that matter) was never actually allowed due to the very difficult political situation that exists in North Korea. The statement says that anyone who is caught using Facebook will be punished (whatever the punishment may be). Most of the citizens there have a very limited access to the internet, which is heavily controlled by the government.

Vietnam also blocked Facebook for 2 weeks, during the protest in Viettnam. Many protesters are said to have organized the event on Facebook.

How to overcome the Facebook block anywhere in the world?

A VPN service, such as LimeVPN will definitely help you overcome this ban anywhere in the world. VPN services are usually used not only for this, but for increasing overall security and anonymity on the internet. What you will get is the access to all of the banned and restricted websites in that country without the fear of being tracked or exposed to any of the surveillance systems. All you need to do is to register for a VPN and choose the monthly plan that you want to use. After that, follow the instructions on how to set it up and you will be enjoying connecting with millions of people worldwide. Is VPN illegal? No. All of the countries do not have laws regarding a VPN and you are free to use it as much as you want.

Facebook restriction does not only work on the country level but also on the level of institutions. Therefore, some of the schools and work places are being hit by a Facebook block. Officials believe that if Facebook is blocked, the students will focus on studying and the workers on working. However, these kinds of blocks can also be overcome by using a Virtual Private Network, which was mentioned before. To sum up, Facebook’s goal is to connect all the people in the world, but they fail to do that because of the problems that may arise. Most of the problems were government-oriented and, as you saw above, most of the reasons why Facebook was blocked were due to governments and leaders feeling threatened by protestors. The Facebook blocking is currently critical in China and whether Mark Zuckerberg is going to succeed in his mission is still a mystery.